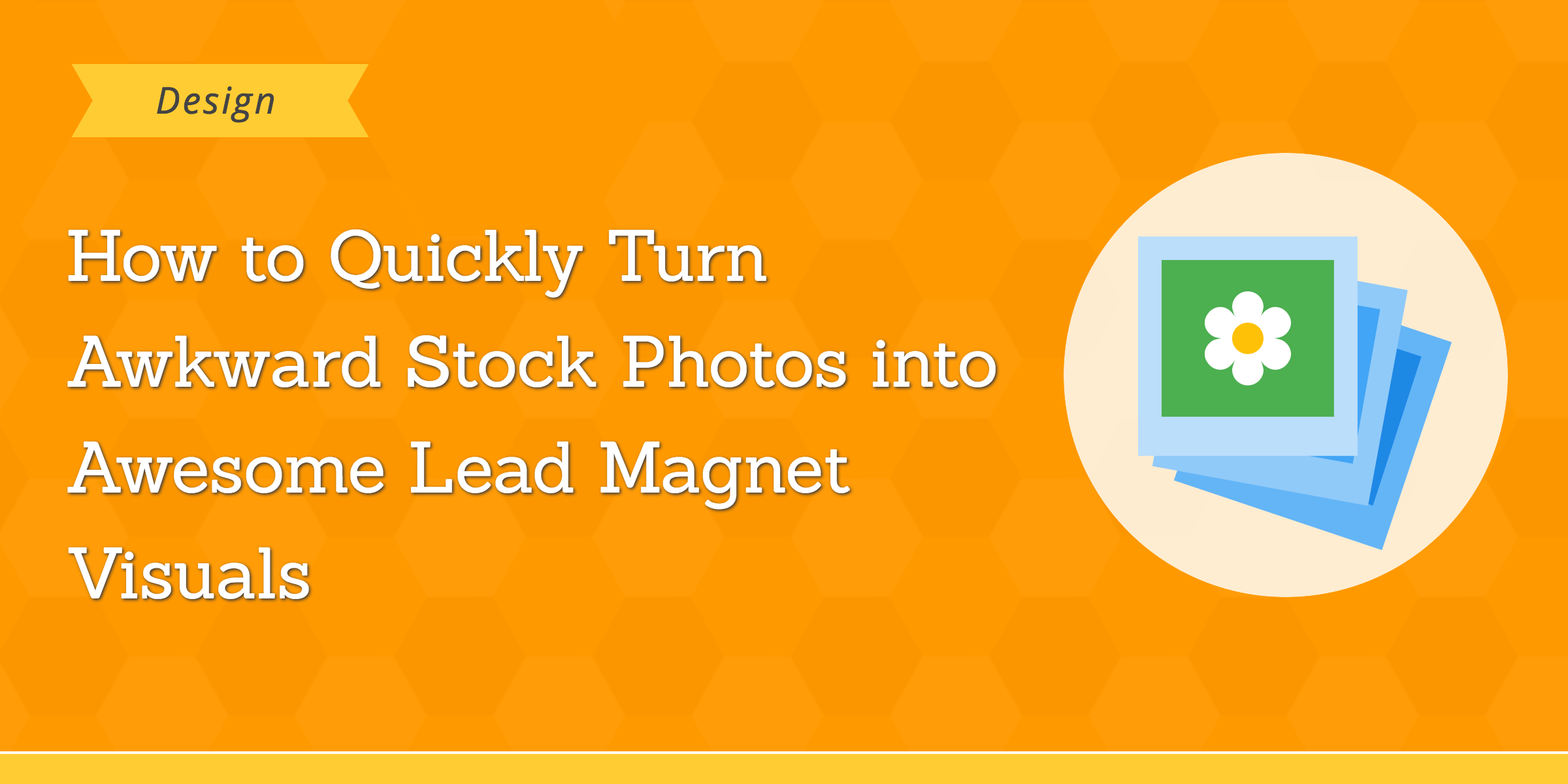 And often make you snigger at any design featuring them, right?

But unless you can take better photos yourself or have someone who could create them for you, you’re bound to using stock images.

Because the alternative then is not to use any visuals at all (which, as I’m sure you’ll agree with me, isn’t really an option today).

But are all stock images bad? And is there any way to use generic stock photos without turning your lead magnet into an awkward thing to look at?

With a couple of simple tricks, you can turn almost any stock photo into an awesome visual for your eBook.

And in this post, I’ll show you 4 ways to make stock photos to visually enrich your lead magnet and help you increase reader engagement.

Intrigued? Then keep on reading.

The Problem with Stock Photography

Now, before we begin, let’s get something clear:

I may be saying that stock photos are awkward to look at, but by all means, they aren’t evil.

They provide you with an option when you can’t create a relevant visual on your own.

And that’s a good thing to have.

But there are a couple of issues with them. Nothing groundbreaking but you should know about them before using stock images:

Stock photos are not tailored to any specific project or campaign. They are a mere result of a generic photo shoot (just take a look at these search results to see what I mean), and because of that, they’re … well… generic in nature.

That doesn’t mean they’re bad. But using them might require making a sacrifice regarding context and relevance.

They’re often based on clichés. And this comes from their generic nature. In order to appeal to a broad audience, stock photos must make do with tired and old ideas.

And finally, anyone can buy and use a stock photo, which means that an image you’ve used in your eBook might also end up on another company’s ad. Just take a look at those 5 most popular stock photo personalities to see what happens when a particular image gets overexposed. But before you get discouraged from using stock photos, let me tell you – it’s not all that bad.

And below I’ve listed some tricks you could use to turn any generic, cliché stock photo into an awesome visual for your eBook.

Looking to create Awesome eBooks and other lead magnets? See how Beacon could help you do that in minutes.

It’s a common mistake to pick the most generic image that relates to a lead magnet’s topic or content.

And I’m sure you’ve seen visuals like these many times:

The examples are many.

But the problem with focusing on generic connotations is that they often fail to create a strong mental connection between image and topic and well, make the image looking plain silly.

Therefore, to make an impression on your visitors, you should try to find a stronger connection between your lead magnet’s title, and what the visual includes.

Here is one way to do it:

Find an image that would relate to a particular word or idea in the eBook’s title.

For example, let’s assume that you’re creating an eBook on helping businesses grow via digital marketing.

You could, therefore, use images with charts or graphs that signify growth. Like this one, for instance. But I’m sure you’ll agree, this cover is darn boring.

The alternative? Play on the idea of growth.

Find an image that represents the concept outside of the business context. For example, a growing tree. The difference is striking, isn’t it?

You can use this method in many ways – by matching specific words in your lead magnet’s title or playing on its key concepts, for example.

The key to this strategy is that instead of going for the obvious, you’re presenting a reader with a visual that requires some mental processing, making it a bit more exciting to look at (and memorable, at that).

#2. Add Text to an Image to Provide Deeper Context

You know, they say a picture can say a thousand words.

And heck, when you look at images like these, you can well agree with it.

But when you take generic stock photos, the only thing they often say is … cliche.

See what I mean: But did you know that adding just a bit of text could help this image tell a story?

Here, just take a look at a reworked version of this image (note, the only difference between the two is a bit of copy I added to the image in PowerPoint). A subtle change but it makes all the difference, doesn’t it?

You can use this strategy in a couple of ways:

No matter which option you choose, it is guaranteed to add context to the image.

#3. Crop and Modify Images to Reveal Only the Most Important Element

You have to include the entire image.

No, actually, you don’t.

In fact, given the stock photography’s generic nature, you even should crop or modify them to feature only what’s relevant to your document.

To illustrate this, let’s use the caption from the previous point but try to find a different photo for it.

This image, for example, would work great, if not for the other person typing on a computer. So what’s the solution? Crop this element out.

Here’s how the image looks like after I’ve used the PowerPoint’s crop feature on it. With the person typing on a laptop gone from the picture, the image and headline finally deliver a powerful message, don’t they?

Cropping isn’t the only modification you could use.

You could also remove the image’s background, or cover the elements you don’t want to show with solid color overlay or text.

And if you’re unsure how to use image editing tools in PowerPoint or Photoshop, check out this amazing beginner’s guide from Hubspot.

Sometimes, one picture isn’t enough to make the impact.

If you’ve ever spent time browsing stock libraries in search for that perfect image, then you know very well what I’m talking about.

So here’s the solution:

Join a couple of photos together to create a powerful story.

Every time I work on this strategy; I think of the Hubspot’s memes. They’re funny, witty, and for the most part, created almost entirely from stock photos. Here, take a look: Creating collages might seem like extra work. After all, you have to find more than one image, right?

But in reality, it’s quicker, since you can use any generic image and put it beside another one, and another one until you create a story.

But as you’ve seen, it doesn’t take much to convert them into powerful visuals.

You don’t need sophisticated tools to do that.

And you can do it with the skills you have.

But if you do it, you’ll end up with a visually enriching photo that will take your lead magnet from awkward to awesome.